PEACHTREE CITY, Ga. (August 12, 2020) – Rinnai Corporation, manufacturer of the number-one selling brand of tankless gas water heaters in North America, announced the ground breaking of its new factory in Griffin, Georgia.  The building construction will begin in August with an expected opening date late in 2021.

Rinnai established its US operations in 1974 and introduced Tankless Water Heating to the North American Market in 2000.  In 2017 the company announced aggressive growth plans in the United States including the expansion of its Corporate Headquarters, the opening of a state-of-the-art Innovation Center, and plans to begin Manufacturing; all in the state of Georgia.  Just eight months later the company announced it had moved into a temporary facility in Griffin, Georgia and had manufactured its first tankless water heater in the United States with long term plans of building a new 300,000 square foot manufacturing facility, also in Griffin, Georgia.  The company continues to make significant investments in expanding its operations and product portfolio, focusing on its brand promise of Creating a Healthier Way of Living®.

Rinnai conducted a comprehensive search to determine where its domestic growth investments would take place and ultimately decided to remain in the state of Georgia.  The decision included a training partnership with Georgia Quick Start and Southern Crescent Technical College.

“We’re proud to have a global company like Rinnai doing business in Peachtree City and in Griffin, and I want to thank Rinnai for continuing to grow their North American footprint right here in Georgia,” said Governor Kemp. “Rinnai’s continued investment in Georgia is a testament to our unmatched workforce training programs, pro-business environment, and unparalleled logistics network, and I look forward to working together as they continue creating opportunities for hardworking Georgians.”

“The State of Georgia has been a true partner in helping Rinnai America in opening our first manufacturing site in North America,” said Frank Windsor, President of Rinnai America Corporation. “We look forward to partnering with them in the years to come as we grow our business in the Americas.”

THE BUILDING AND DESIGN

The new 300,000 square foot state-of-the-art facility in Griffin, Georgia will manufacture the company’s residential and commercial water heating solutions, as well as future additions to the company’s product portfolio as it seeks to expand its product offerings in North America.  “By establishing a world class manufacturing facility in Griffin, Rinnai will be well positioned to provide our customers with high quality products and services.  The growing partnership with the Griffin community is key to Rinnai’s success now, and in the future,” said Derrick Black, VP of Operations, Rinnai America Corporation.

Rinnai has contracted with ASD | SKY Architects for the building design and interior design.  The 300,000 square foot facility will reside on a nearly 60-acre site in the Lakes of Green Valley in Griffin, GA and will consist of four general areas including office space, manufacturing, assembly, and warehouse.  The location provides the company with adequate space for current operations and future growth and expansion.  The Lakes at Green Valley is a 570-acre mixed use development located along the Georgia Highway 16 corridor (Arthur K. Bolton Parkway) at the intersection of Rehoboth Road in Spalding County, Georgia. This property was selected due to the great potential of utilizing the natural features to establish a unique "green" development. The property’s geographical location was also a primary factor in this site selection. It is located three miles east of Griffin, Georgia and conveniently along a four-lane highway approximately seven miles from Interstate 75. The Park is also located in close proximity to other industrial areas that house such names as Caterpillar, Inc., Norcom and many others. The new facility is scheduled to open late 2021. 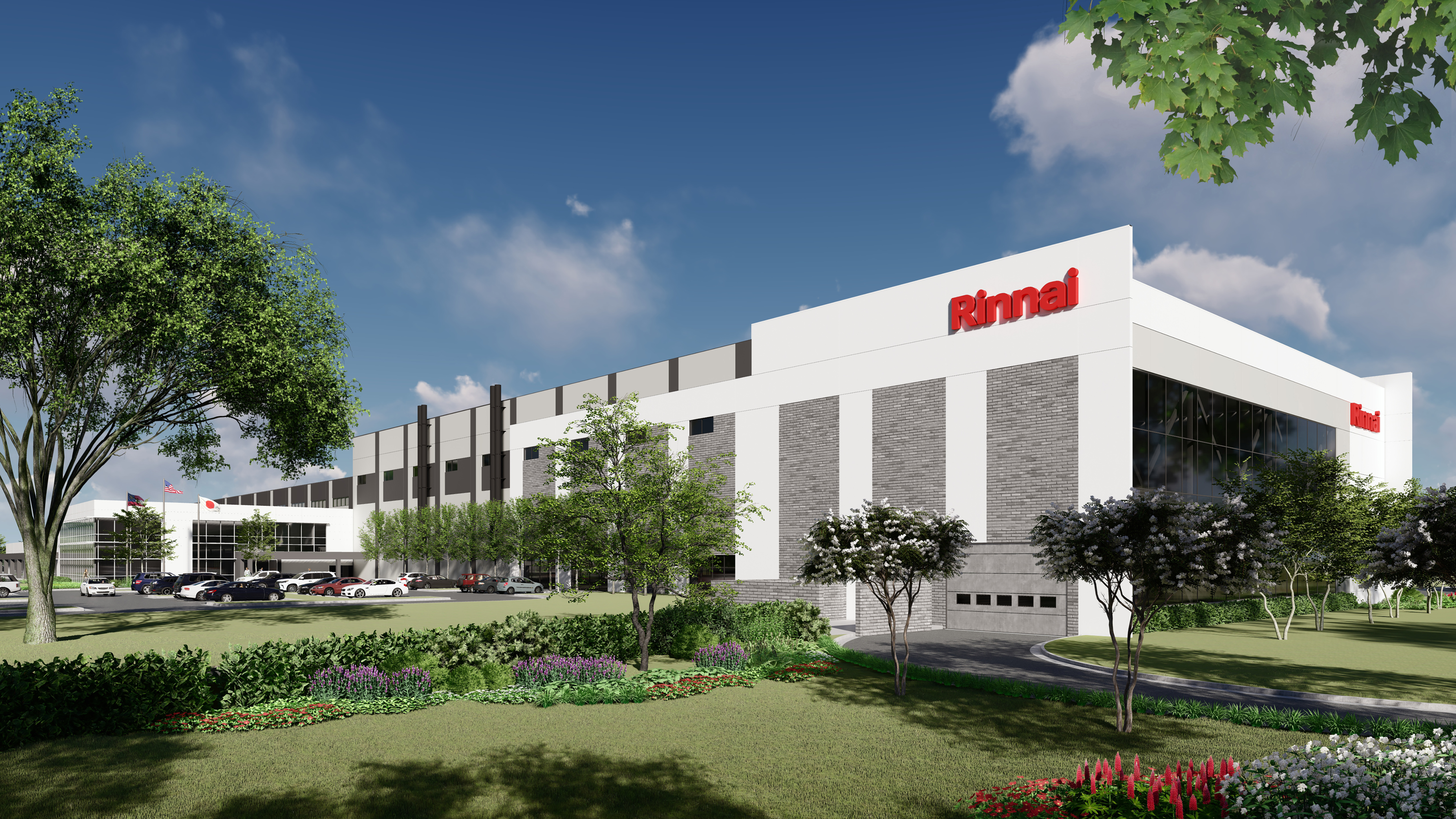 Rinnai America Corporation, a subsidiary of Rinnai Corporation in Nagoya, Japan, was established in 1974 and is headquartered in Peachtree City, Ga. Rinnai Corporation manufactures gas appliances including tankless water heaters, a wide range of kitchen appliances and heating and air conditioning units. As the technology leader in its industry, Rinnai is the largest gas appliance manufacturer in Japan and is the number-one selling brand of tankless gas water heaters in the United States and Canada. Annual corporate revenues, including those of its subsidiaries, are in excess of $3.2 billion. With a global perspective to create 21st-century products for the home and business, Rinnai Corporation commits itself to safety and Creating A Healthier Way of Living©. For more information about Rinnai’s entire product line, visit www.rinnai.us.

Need a Professional Installer? Let's find one nearby

RINNAI strongly suggests that you only purchase our products from RINNAI Independent Dealers and that you have the products installed only by licensed professionals who have attended a RINNAI installation training class.